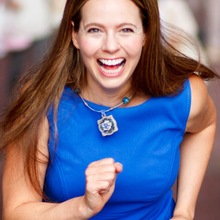 Soness’s talks connect, engage, and move audiences of 10 to 1,000, having transformed over 750,000 participants.  Vulnerable and powerfully, she shares how we can change conversations professionally, personally, and in our relationships with her belief “listening is love.”

Her TEDx talk on “Have You Ever Felt Heard?” received two standing ovations.  And her TEDx talk on “Miscarriage: What do you say?” changed the dialogue of how we are present with those grieving the loss of an infant, hopes, or identity.

Soness is a three-time published academic.  As an Associate Professor of Business Presentation Skills at YNU, her research on communications revolutionized the university system, instilling autonomous learning and interactive teaching.

When she's not on stage speaking, you'll find her performing stand-up comedy. When life gives you lemons, make jokes.

Soness is the official English voice of Hello Kitty.  She lives near the beach and practices Zazen Meditation at her local temple in Japan.

Terms and Conditions
Welcome and Module 0: Getting Ready to Go
BYSB Module 1: Your Speaker Essence and Bio Hacking
BYSB Module 2: Photos that Reflect Your Speaker Essence
BYSB Module 3: Testimonials to "Toot Your Horn" for you
Module 4: Templates:Bringing it All Together
Office Hours + Work-Along-With-Soness Workshops
We suggest moving this party over to a full size window.
You'll enjoy it way more.
Close
Go Fullscreen